She’s known to many for her starring role on Buzzfeed videos and as the “he got money” girl, a meme inspired by the viral video that’s garnered more than 1 million views. She’s also gained accolades from her role on the TV show A Black Lady Sketch Show and is in the midst of creating, producing, and starring in upcoming show Harrity Elementary. Now, the multihyphenate star is celebrating the publication of her new memoir, She Memes Well. The book gives fans an intimate look at her life through a collection of funny personal essays reflecting on her experience rising to viral fame.

To celebrate the publication of her memoir, Quinta channeled her passion for music into curating an exclusive Spotify playlist. For the Record caught up with the author to talk about going viral, the challenges of writing, and her musical inspirations. 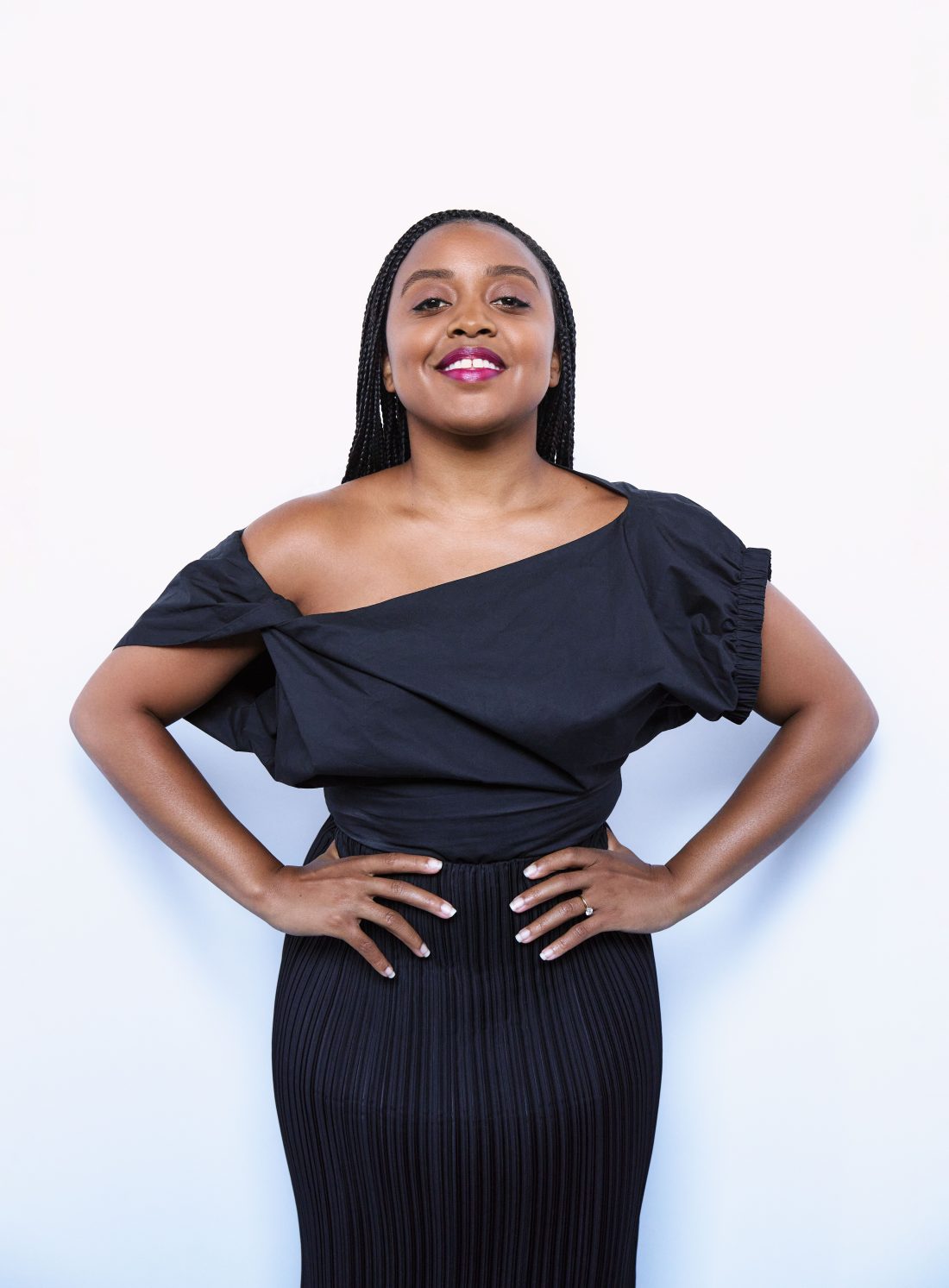 As someone who in many ways originated “going viral” and continues to do so, how do you create content that resonates with so many people?

I don’t think that there’s any one specific path. A relatable tweet can go viral, but also a bear attack can go viral. It’s about shock and awe, and there are many ways to achieve that. But I don’t think virality is the most important thing anymore, which I know might be ironic coming from me. Creating content, whether it be something on the internet, TV, music, or something that feels like art, that’s most important. If it goes viral, great. If not, that’s fine, too. It’s really about creating meaningful work.

You’ve said that writing She Memes Well was the hardest thing you’ve ever done. What made it more difficult than other projects you’ve worked on?

For one, when writing a memoir, you’re making yourself more vulnerable. With the show, I’m creating fictional characters. But here, it’s me I’m putting on the page, so naturally I felt more protective of myself. Plus, the book is going to be out there forever. You can’t go in and change the book after it’s done, so you become super aware of what you’re saying. But I wanted to get over that fear and take risks. If some people don’t like what’s in the book, that’s fine, but these are my truths. I can’t do anything but tell the truth in my book.

Another hard part was that I was writing the book during a very formative time in my life. I was writing from age 27 to 31 and so much of me was changing. Writing a book, you’re supposed to start with ideology and themes. But that’s complicated when your sense of self is still changing. It was a lot of checking in with myself and asking what do I believe? Who am I actually, and what am I putting on the page? And the answer is that I’m different from who I was a month ago. And I want to be able to tell this truth right now. It felt like therapy, but I was my own therapist.

Do you listen to music when you’re writing?

I actually really enjoy listening to classical music when I’m writing because it doesn’t have lyrics. It feels like I have more freedom to write instead of listening to the lyrics. I really enjoy old-school Beethoven; I throw some on and just get with it.

Any favorite artists you listen to when you’re off the clock?

I love music so much. It’s just so formative to my spirit. I’m a big fan of the group The Internet—always will be, always have been. Other favorites are Solange, Frank Ocean, Hiatus Kaiyote, Little Dragon, and Noname. There’s an artist named Amindi whose music I hope gets more plays. Thundercat, I can throw him on any time. Stevie Wonder, I think he absolutely is the best artist of all time. And Aretha Franklin, she’s on play a lot, as is Ms. Lauryn Hill.

And definitely Anderson .Paak. I was so happy about Anderson .Paak and Bruno Mars forming Silk Sonic. You know when you feel like something was done personally for you? I feel like they did that collaboration for me. Separately, they’re two of my favorite artists, and when they formed a band—I just couldn’t even. That was one of the few things that happened in 2020 that brought me joy.

You curated a playlist to pair alongside your new book. How did you choose the songs for it?

The playlist is really fun! I wanted to create a list of songs I mentioned in my book in the order that they’re mentioned so it would feel like people are taking the same journey I took. The first song I danced to at dance school was the Space Jam theme song by Quad City DJ’s, “Space Jam,” so I wanted that to be the playlist’s musical introduction to the book because it’s fun and represents my childhood. Then it grows into more mature songs, some ballads, some heartbreakers, and some songs from Stevie Wonder that fit in that world in all types of different ways. Really, I wanted people to be able to experience the journey of the book in playlist form the same way you have a soundtrack for a movie.

If you had to pick one song to represent the book, what would it be?

You know what song I think about a lot? The theme song to the TV show Big Mouth, “Changes” by Charles Bradley. It’s very simple, the lyrics are just “I’m going through changes,” but I think that song is a good representation of this book. I talk a lot in She Memes Well about evolution and allowing myself to change throughout my life. I think part of growing up is letting yourself go through those changes and not resist them. I also talk about it through memes and how memes evolve on social media. I love hearing that song when the show comes on because it just touches your heart.

Explore Quinta’s curated playlist, inspired by her new memoir She Memes Well, below.

Storytel Audiobooks Will Be Available on Spotify Later This Year